Harder for the baby or the parents?

Last night my heart broke as Hannah threw up quite violently a number of times. Matt just held her over the sink or toilet, I changed the sheets, we changed her only to have her sick again. She was upset after awhile which of course was harder for us to see our baby girl sick and so upset by it. At first we thought it was too much food from small group and staying up later, but when it continued we thought maybe a bad case of the flu. When she seemed so upset I called the nurses hotline to talk to someone because I was worried.

But as soon as she had thrown up all of her food she had eaten all evening she fell asleep and woke up at 8am this morning happy as can be as if nothing had happened. No one could tell she had been sick the night before! 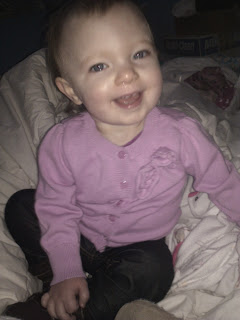 She was back to happy little Hannah ready to take on the world!
So our conclusion is, similar to what the nurse said, she likely just had something her body wanted to get out of her system and then she would be fine!
I on the other hand had an awful sleep because I was worried she would wake up again feeling bad, worried it was something else wrong, worried about her in general.
Throwing up sucks,
but being a parent of a sick baby also sucks!
Posted by Unknown at 5:58 PM