Toddler life - the good, the bad and the ugly

It is kind of ironic that just this morning in church I said, "I love this stage! Hannah is great!". I was mostly referring to her sleep at that point, but meant it overall too.

Really this stage is awesome. Why?
- Hannah goes to sleep without a fuss and sleeps 12-13 hours a night without a peep
- for naps again its an easy put down and sleep avg 2 hours
- she learns something new everyday and is so interactive - it is like a little person is there to actually play with =so fun!
- her personality shines - she is hilarious and quite the character, but also so sweet and for the most part very agreeable which makes her fun to be around!
- she is so capable so the options of what we can do in the day almost seem endless (okay no rollar coasters yet, but there aren't any close by anyway!) 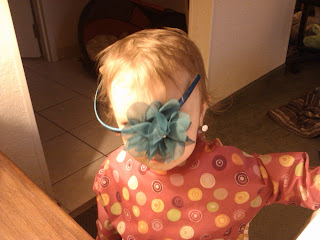 Today was one of those days. She woke up whiny from her nap of 2 hours and would not stop no matter what I tried (and no fever so she wasnt sick, I checked!), so I decided to get out of the house for both of our sanity. Due to rain our option was shopping. By the time we got to the mall she was being great so I let her walk around (a way to get her energy out and for her to have more fun)...a decision I later regretted.

It started off great, where she picked out an adorable hat for $2 and wore it around the store proudly. Then in the shoe aisle she tried on womens shoes and did a fashion show for people around = hilarious and adorable.

in the baby section she turned...

when I said it was time to go, she decided to run and I mean RUN around the section in and around the racks so I could not catch her SHOUTING, "NO! NO! NO!" over and over and over again. In the process somehow she was able to get her shoes off and ditch them too! When I finally caught her she screamed and whined and wiggled creating quite the scene. Eventually in line she quieted down and was doing well again.

I desperately wanted to get some fabric from the fabric store quick. Hannah usually LOVES going there and saying all the colours and picking out the different fabrics so I thought we could do it...

Once out in hall area she realized that if she yelled it echoed. The first time it was actually kind of cute, but then she yelled louder and louder. When I said no she laughed and screamed louder. Seriously so bad I was getting a headache and Im sure those around us were too. She would not stop no matter what I did, so no fabric store for me and home we went...

I imagine it is partly due to missing Matt who has been gone for the week, but mostly just her being a "terrible two" and testing out her boundaries.

This part is not the fun stage.

Thankfully these days are few and far between. What I have to remind myself is to embrace and enjoy the great moments. To praise her often when she is behaving and listening well and in those bad moments, remember that this will pass. There is always tomorrow, or even the next hour which can be good again, so be firm and not give up and realize she is not all bad!

I must admit I do kind of love hearing the stories of the journey of being a parent especially to toddlers, or even babysitting them can be quite the adventure so do share!