Seeing it as...the gift of time

I am not going to lie. I totally thought that by now I would have had the exciting chance to announce to the world that I was expecting again. The first two times it was easy. My doctor kept saying that she was sure she would see me really soon again - so was I. But, God has other plans and I continue to try to see the best in it.

The catch, that has been the most difficult, is that I have been fooled a few too many times over the last few months in thinking that I was expecting. The thing is that with each pregnancy your body changes and your cycle can change a lot. After Hannah I went from having a period I barely noticed to one that people complained about. This time I went from always being every 28 days like clockwork to unpredictable, between 31 and 36 days and showing all of the surefire signs that I had that meant I was pregnant, which now I am beginning to understand as just period signs. Not sure if I did have any early miscarriages, its definitely possible with some times I was so sure it could have happened, but I do not want to know.

What I do know is that we are not expecting another child yet.

Now in that reality, I have a couple of options. Just like I mentioned before in Choosing Your Emotions, I have the ability to choose how I feel and react. Yes, I have been sad, especially those times I was sure I was expecting again. But, I refuse to let that totally get me down and feel like life is over if we do not have our kids close together. There is so much going on to be excited about and enjoy!

Instead, I have decided to see it as a gift of time. 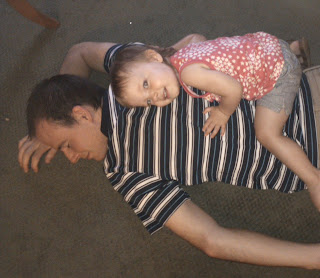 Not only are we being blessed with more time together just a family of 3, but I have so much more options to do stuff while I have one child who is well-behaved (most of the time), much more capable in doing a lot of things and sleeps amazingly well every single night.

I can continue to paint lots without fear of harming any unborn child and I do love getting to transform our house into our home.

Now, instead of what I thought was no time on campus this coming year which changed to one semester on campus, I have an entire year that I could be on campus potentially, getting to see what God will do in and through me. That is exciting!

Not going to lie, if October comes along and we still are not expecting, while missing the chance to meet our little baby, its going to be really, really hard. But, we aren't there yet, and I have faith in a loving, all knowing, amazing God. One who I have no doubt has the absolute best plan for our family and for us in the process of getting there.

So I rest in those truths and enjoy and make the most of the time I have been given during this stage of life.