You know I must admit that I never really thought through the physical impact a miscarriage can have on someone. I always thought of the emotional and tried to offer support to friends that have gone through it, but man it can be physically difficult!

What I have realized is that each woman deals with it differently and the time and situation also effects it greatly.

For me the worst part physically was low hemoglobin!

The day after the miscarriage took place I actually woke up feeling pretty good physically, but I continued to loose a lot of blood that week and by the second blood test was done my doctor called as soon as she got the results very worried about me and needing to know the bleeding was almost stopped or I would of had to of gone into the hospital. My hemoglobin levels were drastically low.

And boy was I starting to feel it. I was very light headed, dizzy very easily and had absolutely NO energy.

It got worse before getting better.

And thing is, I learnt that its a lot harder for your body to go back to normal after something like this.

I also learnt that chocolate and caffeine are no nos when your hemoglobin/iron levels are low because they make you more dizzy and stop iron absorption.

So we have had a couple of weeks of eating high iron meals (Matt has loved all the steak and roasts as a result), a couple of weeks where I would get Hannah dressed in the morning and have to lie down because I was done for the day before we even started and I used all my energy just to get by (and Hannah watched a lot of movies because I had no energy at all to give her to play sometimes)

The doctor said it would be a couple of weeks and she was right. This weekend I started to feel more like myself. I'm not 100%, but I'm close and boy am I loving it! 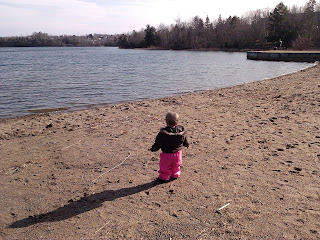 Hannah starring out at the lake after all the ducks had gone away,
during our family trip to the park/lake!
(Yes I know I am blessed to have such a cute daughter and live with this just down the street!)
Posted by Unknown at 5:05 PM