A lesson on "politeness"

Hannah had to have her 18 month shots today.

Both Matt and I were not looking forward to her appointment, but because we had to take the car in and do other stuff in the area of Halifax Hannah was just enjoying being out with both parents on a weekday and had no idea what was to come.

Thing is, that she totally shocked me. Not only did she not shed any tears for her first shot, but for the second shot that hurts a lot more she cried just a bit until she had to nod to agree she was brave, and get her band aid on, and then she shockingly responded right away with a "thank you" to the doctor.

Who thanks the doctor for their shots?! Seriously? 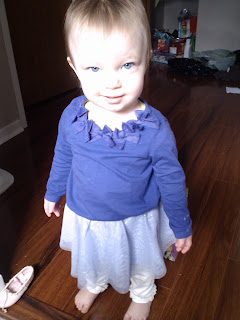 It got me thinking though, too often we get caught up in the things we don't like or something that has upset us and forget that sometimes people are just doing their jobs and trying to help us and we still need to thank them for doing what they need to do.

It made me proud to be Hannah's mom as she thanked the doctor another 2 times and kept saying it as we left...Maybe she will become a doctor if she appreciates what they do so much...who knows?

And thank you Hannah for reminding me that I don't thank people nearly as much as I should!